Sound the alarm – I can add “attend an arena football game” to my list of “things I never thought I’d do!” Not because I didn’t want to, just because I really didn’t even know what it was. Monday night, I finally went to my first Jacksonville Sharks game and it’s safe to say we had an awesome time. 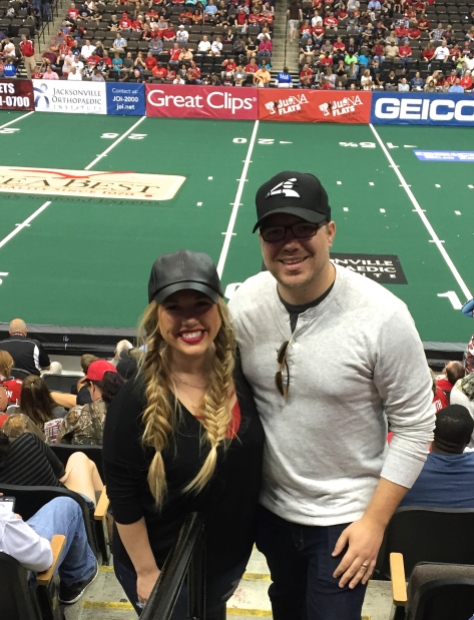 I’ve heard so many people say over the past few years how much fun Sharks games were, how intense they are, and how serious some fans are about arena football, and they were right. I guess I just had no clue that arena football is actually a normal football game, just played indoors. It’s actually pretty genius if you ask me. No sweating or freezing to death, no running to seek shelter when the Florida rain strikes out of nowhere, no wondering if the game is going to get called an hour before kick-off because a hurricane is passing through. Instead, you’re in a climate-controlled venue with 360-degree shelter sitting in cushioned seats with cup holders. Plus, Jacksonville football fans can get their fix almost year-round. SCORE! 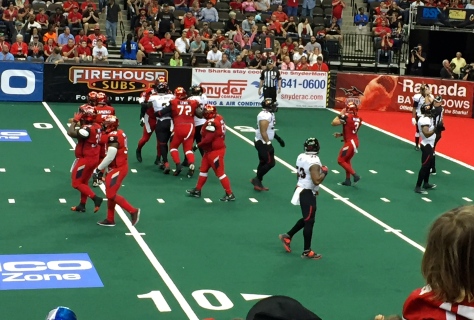 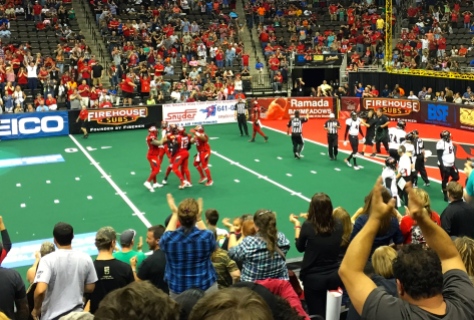 Jimmy and I had an awesome time, and can’t wait for the next game we get to attend, especially now that I know what to expect. If you’ve never been to a Jacksonville Sharks game, here are my personal answers to a few questions I had myself.

Q: I’ve never been to an arena football game. What can I expect?
A: Well, neither had I until Monday night, and I wanted to know the same thing. There are plenty of parking options around the arena, but be prepared to pay $5-10. When you walk into the arena where the game is played, be prepared to be slightly stunned. The arena, which hosts dozens of concerts and shows, looks so much smaller and more intimate when you put a football turf down. It’s actually pretty cool. 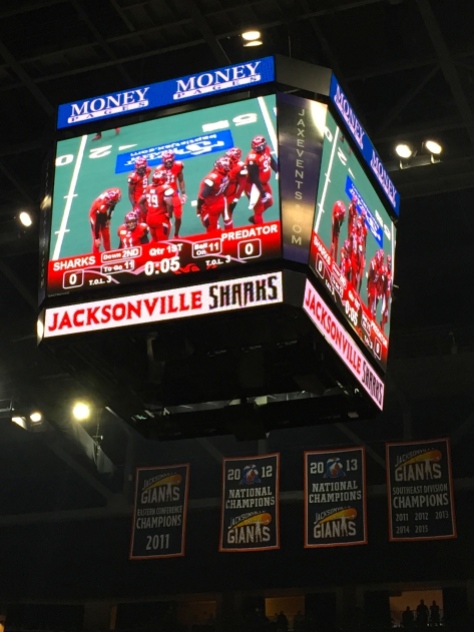 Q: What do I wear?
A: Anything you’d wear to a regular sporting event: comfortable and casual clothing, team colors, jerseys … you could really get away with anything. If it’s a theme night (like Monday’s game was “Redneck Night,” you can totally dress the part. Since it was my first game, I played it safe and wore Sharks colors, red and black (jeans, flip-flops, a black shirt with red tank underneath, a black hat, and {duh} red lipstick). And of course, I had to wear my matching Ellie’s Sparkles. 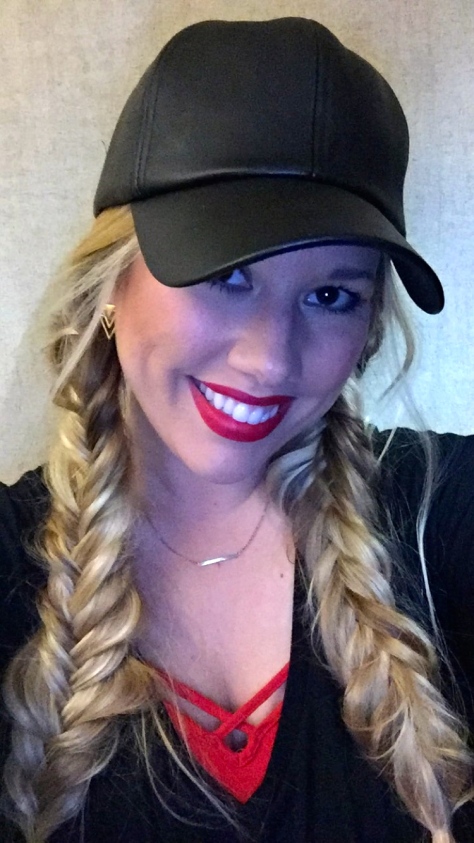 Q: Is it an actual football game?
A: I wanted to know the same thing! The answer is YES. There may be slightly different rules (which I haven’t picked up on yet), but the game is played just like a regular football game, just on a shorter field. Also, the field goal is much more narrow and looks to be a little lower. I’ll do more research on this – I’m curious! Also, we thought it was strange how involved the coaches could be. They were on the field and all up in the players’ huddles throughout most of the game (the away coach drove us crazy …. stop spitting so much, dude!). 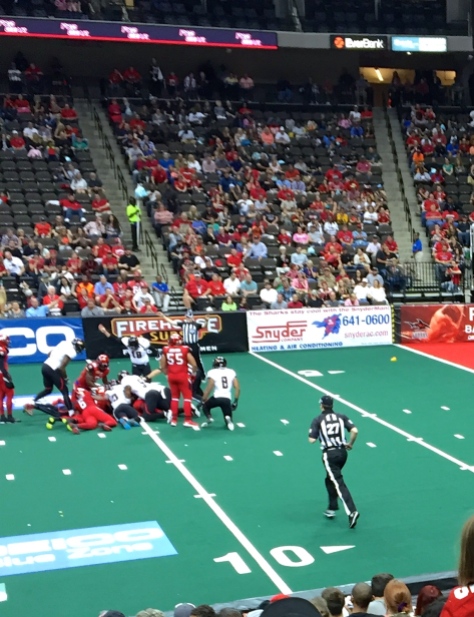 Q: Is it kid-friendly?
A: It is! I bet kids would love this. Simply St. Augustine and her five (yes, five!) children sat in the row in front of us and they all seemed to be having a great time, as did every other kid at the game. I think it would be an awesome family outing.

Q: Is it a good date idea, or should I go with a group of friends?
A: Both! Jimmy and I had a great time by ourselves, but decided we’d like to bring a few friends, too! Going with a small group is obviously less overwhelming and you can actually pay attention to the game, but I bet it would be a ton of fun to go with a group and really get into the competition.

If you’re looking for something to do this Saturday, consider going to the Sharks game at 7 p.m. against the Arizona Rattlers. It’s British Invasion night, and there is a free live concert after the game by the Beatlemaniax. You can still buy a pair of season tickets for only $99, or take advantage of the Family Four Pack special for this game only (includes four tickets in the red section, four hot dogs, four Cokes and four bags of chips) for only $80! (Upgrades available for $10.) 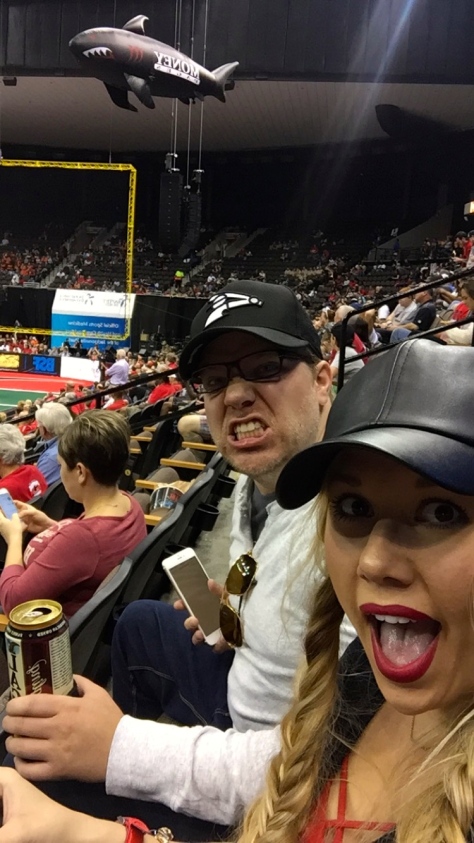 Oh! I’m a modern-day Snap Queen, so you if you want to see live Snaps from the game (and other randoms throughout my life), follow me on SnapChat! My username is BlakeleyA, or you can scan my Snap Code in your app.

I look forward to seeing you at a game!

Disclaimer:Thank you Jacksonville Sharks for sponsoring this post. All opinions are my own.